Beauty and health, presented to the Dead sea 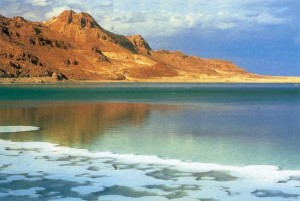 Dead or Salt lake is so named because of very high concentration of minerals and salts. So high that its waters will not be able to survive any living creature. Very strong density of water makes it impossible voyage, but to stay on the water without much effort.

Dead sea water replenished hot springs Zohar and Mazor, as well as fresh water from nearby springs and the famous waters of the Jordan river. In the sea formed is rich in mineral substances, dirt, postponed later near the coast. These mud is famous for its unique healing qualities, especially in terms of treatment of joints and skin.
Properties of minerals and salts from the Dead sea people were known even in ancient times, evidence of which is found during excavations of the ancient factory for the manufacture of cosmetics. Modern Dead sea cosmetics, skincare skin, made on the basis of minerals, salts and mud from the Salt sea, gives beauty to people all over the world.
The main consumers of cosmetics from Dead sea minerals are people who suffer from diseases such as atopic dermatitis, psoriasis, eczema, as well as diseases of the joints – rheumatism, arthritis, pain in the joints, the effects of trauma.
Cosmetics sea Salt gives beauty and health
Figures of modern science was able to confirm that mud and Dead sea salts have anti-aging and healing properties. Made cosmetics with minerals that affect rejuvenation and stimulation of the skin – nourishes, cleanses, moisturizes, gives the cells are saturated with oxygen, activates the metabolism. As a result of such an amazing impact skin will look healthy and young.
If you do not stimulate dull and tired skin, the treatment will not have full effect, as the skin will not be able to fully absorb all the nutrients from cosmetic products. That is why you need to start treatment with regular use of salt and Dead sea minerals.
The waters of the sea, similar trace element and mineral composition of blood plasma, but without the blood cells and in fairly concentrated form. Thanks to this composition useful substances cosmetics perfectly absorbed by the skin, without causing the development of allergic reactions, and also help strengthen the immune system, eliminate skin irritation and relieve stress. Using Dead sea minerals, you can rejuvenate and restore the skin and joint.