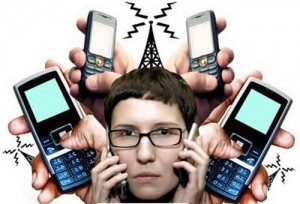 Mobile phones in one form or another for a long time and surely won fame as a versatile, convenient and useful devices that allow you to communicate with people in different parts of the world and provide many other useful functions. However, the mobile phone that caters to the mobile operator is primarily a source of electromagnetic radiation, which in theory may cause harm to our body, especially our brain. It is fair to say that scientists have conducted a lot of studies that prove that modern phones are not able to harm our body or its separate parts in 99% of cases.
However, many people still doubt the result of such research and therefore are wondering how you can still protect yourself from the effects of mobile phone radiation, if the harm he had in reality.
With regards to this there are a few simple recommendations.
And one of the most effective together with the phone to use a wired headset. It allows you to keep myself far enough and comfortable to talk in any conditions. Are these headsets are not expensive, and they often come bundled with the phone, and if not, if you can afford the phone and this headset you can afford.
If no headset or no opportunity to use it, hold it to your ear during a conversation better only after the caller on the other side already picked it up. It is believed that the radiation intensity maximum at the moment of connection.
If possible, keep the phone away from himself. For example, if you’re in a car, then put the phone in the glove box or on the adjacent seat, and do not keep it in your pocket.
It is also recommended not to use the phone in enclosed spaces with a high content of metal in the environment.