Method plastic surgery in urology with the use of CO2 laser

Using this technique plastic surgery using CO2 laser, it was possible to keep the skin in the area of remote oleagenous, not using plastic, and to provide sufficient mobility to approach the head of the penis followed by the imposition of separate catgut sutures.

Drainage was carried out for medical reasons, depending on the extensiveness of the lesion and infection of the tissues thin rubber strips. An additional incision on the skin was applied with excessive tension. 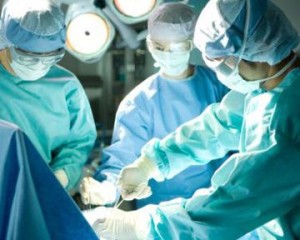 Patients patients in simple ulcer of the skin of the penis all the affected surface in order sterilization was handled moderately defocused laser beam by evaporation of excess granulation tissue, was performed simultaneously leveling the entire surface. The operation was completed with simultaneous skin autoplasty by Tirso graft taken from the thigh or penis.

In the postoperative period of wound healing in patients operated on because of oleagenous, in all cases took place by primary intention, necrotic changes of the skin were observed, the swelling of tissues was minimal. Patients patients who underwent surgery due to a simple ulcer, showed complete healing of skin grafts.

Should also indicate that all patients, due to less trauma after laser exposure, the symptoms of pain was poorly expressed, so they were limited to the appointment of analgesics decreased by more than twice the term of treatment.

Thus, the use of CO2 laser in the implementation of skin-plastic surgery in urology is a fairly effective method and can be recommended for further, more widespread practical use.