Skin tumors malignant character constitute from 12 to 14 % of all malignant neoplasms, most frequently affecting the skin — in the 80-90. There are various methods of therapy of malignant skin tumors radiation, surgical, medicinal, physical, and combinations thereof.

Practice shows that in recurrent and actionoriented tumors positive results can bring only surgical methods of treatment, which is advantageously combined with the primary substitution by plastics. However, with the defeat of cancer of the eyelid skin and okologlaznichnoy area with spread of the tumor into the orbit, when exenteration is her primary plastic paleopathology flaws not yet found wide application.

After such operations it is recommended to close Nude bony walls of the orbit tampons. The wound surface within 6-8 weeks covered with granulations, and then slowly epithelialized. Postoperative treatment lasts up to 3-4 months. Thus there is a real danger of infection through the optic foramen and the upper orbital fissure into the cranial cavity. 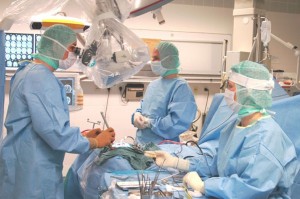 The proposal of some authors close to the orbital wall free skin grafts are not widely used in the clinic, because these grafts usually on the exposed portions of the bone are not staying.

To pay more attention to the use of Filatov stem for plastic surgery of the orbit. Currently pedicled flap is mainly used for secondary reconstructive operations. As the plastic material during primary recovery operations, it is rarely used.

On the one hand, the prevailing tendency is explained by the fact that in malignant tumors is not desirable to postpone major surgery 3-6 weeks — the time required for forming and moving a pedicled flap, and insufficient practice doctors with this kind of surgery.

It is advisable to use Filatov stem for primary reconstructive surgery in the area of the orbit only in the surgical treatment of slow-growing tumors. A significant disadvantage of this method is its a lot of stages and the duration of treatment.