Vesicoureteral reflux causing urinogenny the spread of infection in the kidneys with the development of pyelonephritis and its complications continue to be a relevant problem in pediatric urology.

For 30 years, a comprehensive study of urodynamic disorders arising from regurgitation of urine, varied views on the mechanism of the phenomenon and its correction, surgical activity was replaced by moderation and elaboration of strict indications for surgical removal of the reverse current of urine.

The aim of this work is to examine the results of hirurgicheskoe treatment of vesicoureteral reflux. For the period 1974-1985. in the urological clinic of ksmi was observed 130 children with reflux in the age group of 4 to 14 years. The largest age group consisted of children from 4 to 7 years with a predominant predominance of girls (110 of 130). 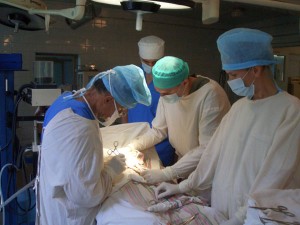 Primary reflux associated with the insolvency of the mouth of the ureter, diagnosed BY patients, secondary in combination with anatomical and functional obstructions in the bladder and in the urethra in 20 patients. The first degree of the reverse current of urine was detected in 33 children, the second 29, third — 49, fourth and 19 (according to the classification of Bridge and Roe).

Surgical treatment of 72 patients subjected mainly with 3-4 degrees of reflux, of which 69 carried a plastic antireflux surgery 87 ureters (51 — on the one hand, 18 with two simultaneously or in two stages), combined in 10 observations with the liquidation of infravesical obstruction transvesical access, three — nephroureterectomy total removal refleksiruyuschego of the ureter.

Plastic antireflux technique is based on the increase in the length of the ureter under the mucosa of the bladder and performed intra – or extrauterine access.