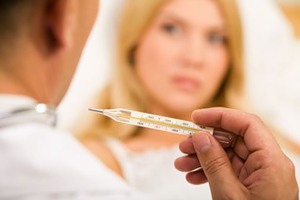 If you suddenly felt unwell, although recently felt fine and felt cheerful, if the thermometer shows a higher temperature, beginning to ache joints, if laid nose, headaches began, it is likely that you have contracted the flu.
High fever, physical weakness, excessive sweating and other uncomfortable symptoms – not the most serious consequences associated with such ailment. More dangerous are all sorts of complications. Disease threatens with occurrence of pneumonia, sinusitis, myocarditis and other unpleasant consequences. However, there are ways to minimize the potential damage.
How to cure flu and competently carry out prevention of this viral disease?
The flu is a very insidious disease caused by mutable viral strains 2 varieties A and B. to Oppose him possibly using different preventive methods – specific/non-specific.
The most effective option specific antiinfluenza prevention is considered a routine vaccination. Vaccination significantly reduces the likelihood of disease, facilitates the progress of the disease, protects the patient from the occurrence of severe complications. Apply two types of vaccines – killed and live. In the composition of live vaccines include attenuated viruses of particular strains of the disease, and the dead include parts of dead viruses.
Vaccination is recommended to worry early to have time to build immunity. For the formation of stable immune system will take about fourteen days. Usually first affected by the flu are recorded at the beginning of the winter season. So end of November is the best period to protect themselves from the approaching epidemic. If you missed timely vaccinated against influenza, there is no need to worry, because there are many simple methods of prevention of influenza.