Assessing the immediate and remote results of surgical treatment of traumatic aneurysms, medical management concluded that among operations, reducing the main blood flow, the most effective from the point of view of restoring the original functions of the limb should be considered along with lateral and circular vascular suture venous plasticity (prosthesis, patch) after excision of the pathological of the bag.

Our research also found that radical surgical medical treatment of traumatic occlusion, aimed at restoration of blood flow, is no less complex than other types of operations because of the effects of vascular injury. Indeed, almost always observed problems in the approach to the field legirovannykh arteries that were in scars and adhesions. 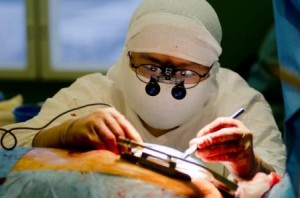 In addition, especially in the proximal and distal ends of the damaged vessel were found degeneration, hypoplasia, and complete obliteration of thrombotic masses. Outside of these changes in the wall were normal. In this situation, an attempt to commit Deux-obliteration hardly justified, and even impossible, as organized thrombus is firmly fixed, and the ends ligated arteries are transformed into a thick cord.

With our medical point of view, to eliminate the defect in such cases, the most appropriate venous transplantation, which is particularly shown in axillary brachial and femoral-popliteal region.

The indication for the use of venous autograft was the impossibility of elimination of the defect by the imposition of vascular sutures. We believe the attempt to restore blood flow justified if there is at least one small prospect of saving the limb, regardless of time since injury and local conditions.