Indication for the specified type of plastics is the location of the tumor on the inactive tissues of the face, the forehead, scalp, i.e. in areas where it is difficult to spend locally advanced plastic surgery.

Surgery was performed under General anesthesia or under local anesthesia. Leather cut conventional scalpel and dissection of the tumor and free dermal or dermal-fat flap was performed using a laser scalpel, using 80 or 100 capacity (20-25 watts output, with a power density of 0.036-0,045 kW mm2). Dermal or dermal-fat flap was vivals in the edges of the defect with a Dacron sutures. 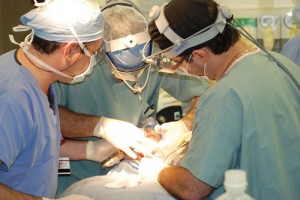 The wound on the mother soil in most cases usualas on lavsan, sometimes applied locally advanced plastic techniques (mobilization of the wound edges, extra cuts).

The transplanted flap imposed fibrinous film soaked in saline solution, then a piece of sterile foam, 2 cm thick, cut to shape of the flap, which tied the all node Dacron sutures. As a result, the entire surface of the flap was created uniform pressure. The wound from the top was closed with sterile gauze pads. The first dressing was done on day 14-16. This was filmed the stitches and the wound was done in open air — flap covered with a thin layer syntomycin emulsion.

In all patients surgery was held with less blood loss. Ligation of small vessels in the wound, usually not performed. Postoperative pain patients was not celebrated, moderate edema was diagnosed in 8 patients. Partial superficial detachment of the epidermis to 20 occurred in 2 patients (to 11.11).