During the operation at an earlier date, when the tissues of the perineum and around the urethra retained inflammatory infiltration, there is always the risk of wound infection with subsequent suture in the area of the urethral anastomosis.

Our clinical studies have shown that surgery is always necessary to start with a scar in the suprapubic region, excision of vesical fistula and release of the bladder from under the symphysis pubis to create his mobility and the free shrink in the postoperative period.

Following this, the ongoing revision of the cavity of the bladder, in order to clearly see the internal opening of the urethra. This is a very important moment, because we have many times repeated operations found that during the previous operations conducted at other medical institutions, the distal end of the urethra was sutured not with its Central end, and with a False move, done by the bougie into the bladder wall. In such cases, of course, patients do not step recovery urination. 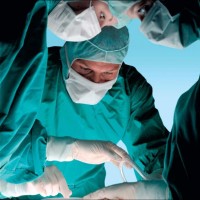 From January 1980 to remove scars in the Central end of the urethra, we use a CO2 laser (laser medical setting Scalpel-1). The use of CO2 laser for scar removal by evaporation greatly facilitates the operation.

In addition, a high bactericidal and hemostatic properties of the CO2 laser, and the absence of marked edema of the tissues at the site of laser impact create the conditions for the formation of a more gentle and flexible scar, preventing stricture recurrence in the area of the urethral anastomosis.