The results of autoplastic in oral and maxillofacial surgery

All patients after surgery felt pretty well. Pain most patients were absent.

To a much lesser extent in comparison with the same surgery, a conventional scalpel, tissue swelling was. This allowed us in the postoperative period to withdraw the appointment of medicines.

Remote research results in the time period from 6 months to 4 years were followed up in 10 patients. Recurrent tumors were not detected in any of the patients. This is consistent with the data of M. sh. Abdurazakova, 1980, which has managed to reduce the rate of relapse from 17.5 to 2.3 in the treatment of 315 patients with malignant skin tumors of different localization. 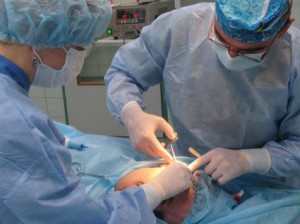 This is a good illustration of the data obtained in the experiment, and depends on covering laser the wound coagulation of the film, which is kind of a biological bandage, which reduces the effect on the nerve endings in the wound area by mechanical and chemical stimuli. It brewed all blood and lymphatic vessels, which greatly improves the ablastics during cancer operations, as coagulation film impermeable to cells and formed elements of blood.

At the same time it does not impair the nutrition of skin graft in the first few days after surgery until the sprouting of blood vessels, which confirmed complete healing of the grafts from the patients we operated on. Patients satisfied with the result of the operation, although the patches differed in color from the surrounding tissue, which somewhat narrows medical indications for application of the specified technique.

On the basis vysheizlozhennomu, it can be concluded that the use of a laser scalpel for the treatment of patients with malignant tumors of the skin is an effective tool that extends the capabilities of oral and maxillofacial surgery and Oncology.