The results of the plastics vesico-vaginal fistula

Of the 22 patients with vesico-vaginal fistulas operated in a similar fashion, 21 showed complete recovery. Only one patient has had a setback of fish, however, far from the mouths of the ureter that after 6 months allowed to make a second plastic razvlekatelnym way with a positive result.

Since 1980 in the clinic for the surgical treatment of vesico-vaginal fistula has been used CO2 laser (laser Scalpel-1). As you know, the greatest difficulty fistulography performed from any access, is for the operator splitting — splitting of the vaginal wall from the bladder wall in the area of the fistula. 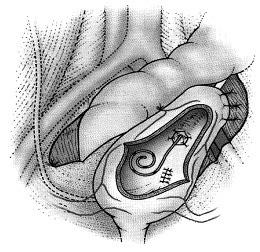 This manipulation is so great difficulties, more pronounced than in the area of swish cicatricial process. Scars are sometimes cartilaginous consistence. All this creates considerable technical difficulties while performing the operation, making ultimately depends on the success of the operation.

The use of CO2 laser for these operations, due to the bactericidal and hemostatic effects of laser radiation, allows quickly and to carry out without dissection of the tissues of the vaginal walls and bladder, simultaneously vaporizing the scar tissue in conditions of good hemostasis.

In relation to this pattern has been simplified not only the surgical technique but also decreased the time, and radical removal of scars by coagulation and sterilization laser beam to create the conditions for better wound healing.

Of the 32 patients patients with vesico-vaginal fistula operated with CO2 laser, 31 the healing was complete. One patient (operated transvesical) came a recurrence of the fistula already on the 3rd day because of the defective drainage of the cavity of the bladder. 6 months later she again operated razvlekatelnym access using the CO2 laser is recovered.

Thus, the use of transvesical method of plastic surgery of vesico-vaginal fistula using graft of peritoneum and CO2 laser improves the efficiency of surgical treatment in this group of women, preventing the recurrence of the fistula.