The results plasty resected wall of the stomach small intestine

Mucosa area of the intestine sewn in place of the resected stomach wall, actively secretes a juice alkaline reaction. The excretory function is very persistent and continues throughout the entire period of observation (up to 6 years).

The pH was in the range of 7,5-8,6. 2-3 years after surgery, the increase in the number of goblet cells that produce mucus, and alteration of the epithelium of the gastric type. This mucus is alkaline and covers the mucous membrane of the intestine in the form of a film, which protects it from aggressive gastric juice. Protective film of mucus prevents the diffusion of ions and impedes the penetration of the epithelial cells. Mucus neutralizes hydrochloric acid. 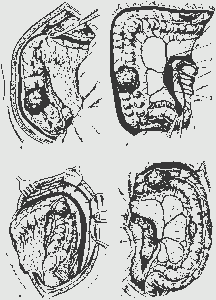 When there is insufficient blood supply to the mesenteric intestine or at closing defects of the stomach wall in the presence of peritonitis, the stability of an implanted area of the intestine is significantly reduced. In 8 dogs in which the defect resected gastric wall was closed after 6 hours of his education emerged necrosis, abscesses at the junction of the stomach to the rectum, suture failure. All animals died from peritonitis.

Thus, we have shown that within 1 month after the operation, but especially in the first 5-10 days, enclosing a segment of the colon krovennan not enough. The final formation of vascular connections comes only after 1 month. In this regard, great importance is the utilisation in the first days after surgery medicines that prevent hypoxia and circulatory anastomosing bodies.