Three treatments-treatments that help to cope with skin diseases 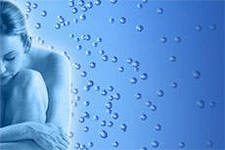 These procedures shows the physico-chemical action in the first place on the skin, and then to the tissues of the body. A certain value is the dose, the primary condition of the skin and the duration of exposure to drugs.

This procedure, when the oxygen treatment is used in the treatment.

This procedure helps restore blood flow, regulation of respiration, metabolism, which was broken during the sickness and hypoxia.

The field of cosmetology this procedure uses oxygen in the form of oxygen baths, inhalation, subcutaneous and cutaneous oxygen. Inside apply cocktails from oxygen, which consist of protein eggs and hips. And so the effect was much better in it add a fortified compound.

Ideal for treatment in the elderly, skin itching, eczema, neurodermatitis. Besides tend to get rid of increased pigmentation, various lesions of the skin, accompanied by lack of oxygen.

Who is not allowed such a procedure?

If there is an idiosyncrasy of this procedure with oxygen.

This method, when the procedure is sprayed into the air medicinal drugs of origin. Aerosol can be used as inhalation and a local view. But in cosmetology using the method of irrigation. The cylinders propellants, drug substances. In addition, the container has a spout. 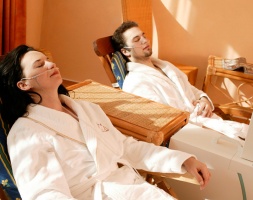 Used in cosmetics also spray bandage, i.e. while spraying on the skin film is formed, which does not allow microorganisms to penetrate and stored for five days. When you no longer need it you can just rinse with water or fleece with chloroform.

These films help to solve the problem of skin diseases caused by bacteria and fungi, or with no large wounds and burns.

Who fits and doesn’t look like such a procedure?

Suitable for treatment of inflammatory processes on the skin that are caused by fungi and microbes, itchy dermatoses.

You cannot use if an allergic reaction to any drug from the mixture.

Therapeutic use air ions. The effect of such a procedure depends on aaronow, or rather its electrical charge. They are able to react with the tissues after losing charge.

During the procedure normalizes perspiration and the electrical resistance of the skin. Also there is an acceleration of wound healing, altered e-rd capacity of the blood, the pain is reduced. A normalization of the cardiovascular, nervous system. The procedure leads to the body’s resistance to infectious diseases, stimulates metabolism.

During the treatment can apply apparatuses AF-3 and AF-2. This high-voltage generators, which produce sufficient number of aaronow in a single charge on the skin. From treatment rooms clean metal objects. The device come from the processing area by 15 cm Procedure takes 15 minutes. For best results it is necessary to go through 10 procedures.

Who needs the procedure?

Fits great for the treatment of venous ulcers, alopecia, pociagi, neurodermatitis and eczema.

It is impossible to carry out the procedure, if: tuberculosis, cardiovascular insufficiency, vascular sclerosis, benign and malignant tumors, the sensitivity to ionized air.