Autovenous plastic main vessels in injuries of the extremities

Cardiovascular surgery in recent years has been widely spread. Offered many encouraging recovery operations. However, the results leave much to be desired.

Rely on the synthetic prostheses and homotransplantation has not justified itself and was quickly replaced by disappointment. Frequent aneurysms and thromboses them in the majority of patients nullify the effect of the surgical intervention. To some extent these shortcomings deprived of autovenous plastic, which is becoming the method of choice for the reconstruction of the vessels. 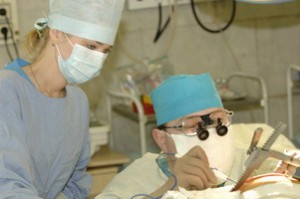 The basis of our work is based on 15 years of experience in the treatment of 47 patients with injuries of the extremities, which in the restoration of impaired circulation used plastic own vein. The age of patients ranged from 18 to 47 years.

About fresh injuries of the main arteries of the limbs operated on 29 patients. In 7 patients was damaged brachial artery, 13 — femoral, 9 — popliteal. In all cases, critical thought perhaps an early restoration of blood circulation in the vessel’s own vein.

We came to the conclusion that even with delayed intervention in patients with fresh injuries of the great arteries and a significant diastasis in the complete rupture of the vessel should try to normalize the venous circulation through transplantation and not to hurry with the implementation of amputated limbs.

The group of patients with sequelae of injury of blood vessels of the extremities consisted of 18 observations. Traumatic arterial aneurysm was observed in 10 patients, traumatic occlusion — 8. The need to restore blood flow when fresh damage to the great vessels was never in doubt.