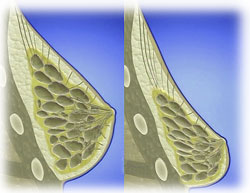 After childbirth and breastfeeding, weight loss or due to the age of the woman’s Breasts can lose attractive height and become rasplyvshuyusya. To eliminate this defect by a surgical procedure called a breast lift.

The operation is performed under General anesthesia. During the operation, the volume of the mammary glands are distributed so that the nipple is shifted to the normal position, the shape of the breast is restored or even improved, in comparison with the original. The operation lasts about 1.5-3 hours depending on the complexity and depth of the defect. After surgery may reduce the size of the bust. This is due to the fact that the surgeon removes excess stretched skin, and themselves Breasts harden.
In the postoperative period should be within 2 days in the hospital under medical supervision, and within a week be careful not to expose your body to the load. In addition, after the operation, it is recommended to wear a special bra that contributes to the consolidation of the result. The final effect can be seen after 4-8 weeks after the procedure.
Many women have expressed doubts about this operation because of the presence of scars. But their presence depends on the characteristics of the skin of every woman. especially the scar is noticeable in the first six months after surgery, then it becomes thinner and quieter. But the effect is much longer and is worth to wait a little. In addition, the presence of stitches depends on what time the years of the procedure. Typically, the stitches are made around the areola of the nipple that is only noticeable on the naked breast. In a very complex and advanced cases the scar can be carried out from the areola down to the inframammary fold or even continue it.