The venom of the spider and erection 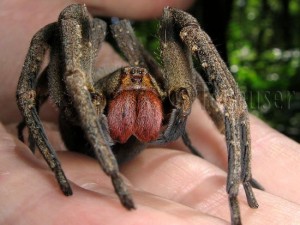 New new drug to treat erectile dysfunction can become toxic substances isolated from the venom of the Brazilian spider.
Many people believe that scientists conducted an experiment can lead to multiple studies, which will focus on the development of a medicinal product, which can results to surpass the well-known Viagra.
This poisonous Brazilian spider lives in southern and Central Africa. Scientists such spider was interested because of the numerous accidents. The bite of the Brazilian spider is very poisonous. Due to the fact that the composition of the venom is PnTx2-6 (dangerous toxin), which exhibits interesting properties.
After the spider has bitten the victim she usually after a certain time, there is a painful erection (priapism). Such an erection, which is caused by the bite of a poisonous spider, can last up to five hours. It can lead the body to exhaustion and impotence. Because of these findings, the scientists decided to send this property is poison for the sake of the male sex. 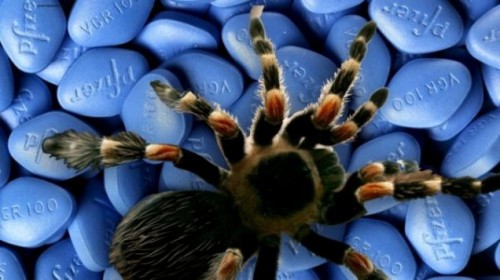 For the experiment, researchers chose white mice, which suffered from erectile dysfunction and heart disease, which were acquired at birth. After the poison has cleaned of foreign substances was administered to mice by injection. After the measured contents in the tissues of mice toxin. The result, which came after research, was shocked by scientists. As the poison caused in the body nitric oxide, and this led to the erection.
Modern drug Viagra, which aims to improve the potency, which is based on blocking PDE5 (specific enzyme). The conclusion is that nitric oxide affects erection enhancement. There is an increase in blood circulation in the penile cavernous bodies, and vasodilation. But there is also a negative factor – Viagra 30% does not work.
But the venom of poisonous spider is directed in the other direction – muscle relaxation using nitric oxide. Therefore, it is safe to say that the new drug on the basis of the venom of the Brazilian spider will be safer for all funds, which are known today.